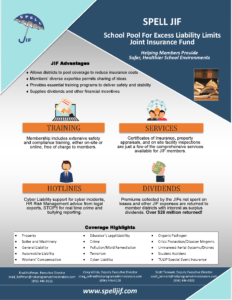 For the eight years prior to forming the SPELL, the three charter member owner groups were formal purchase partners of various insurance policies from commercial carriers under a rotating lead agency agreement. Beginning with the July 1, 2000 annual reorganization of each owner group, it was apparent that the insurance market’s soft pricing cycle was rapidly coming to an end. The owner groups realized that it was inevitable that the cost to fund for excess losses on a group basis above their current retentions would be less expensive than paying excess insurance premium(s) individually.

The SPELL was formed as a logical and much needed financing mechanism designed to provide owner groups with a more cost-effective method for financing risk. The SPELL’s objectives mirror those of its Owner Groups:

To schedule a Concept Presentation and hear how the JIF can help your district, click here.